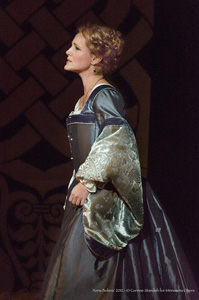 “Mezzo soprano Lauren McNeese was vibrant as the heroine. She played the role with spirited grit, portraying a Cinderella in control of her own life — not an easy task given that it’s the men who set the action in motion. While the men may get the ball rolling, McNeese presented Angelina as the one in command — especially when she demands a man who can offer her love, kindness and respect instead of mere wealth. . .she displayed a technically impressive voice, making trills and leaps that thrilled with sparkling intensity.”
– Omaha World Herald

“Tulsa native Lauren McNeese is superb as Cherubino, capturing the exuberance and petulance of a teenage boy. And she sings the show’s best-known melody, ‘Voi, che sapete,’ in winning fashion, showing the self-consciousness and shyness melting away as the song progresses.”
– Tulsa World

“As the hormonally out-of-control young page Cherubino, mezzo-soprano Lauren McNeese set the bar for this production’s energy level. You may never see a more athletic Cherubino. McNeese plunges headlong into the page’s antics as breathless idolator of the countess and maddening nemesis of the count. She also makes the most of Cherubino’s chances to shine vocally”.
– Detroit News 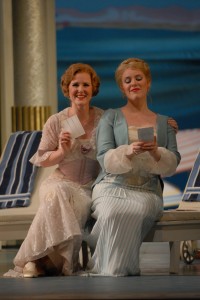 “Lauren McNeese and James Creswell cutely represent the economic underclass who are beneath the notice but not the exploitation of the arrogant sexual braggart. McNeese joins Schrott splendidly in the familiar La ci darem la mano . . .”
– Reuters

“Lauren Mcneese sounded and looked both bright and easy in the role of Rosina. She showed unexaggerated grace as a comedian and held her own in the lesson scene alongside Robertson’s brilliant antics at the harpsichord, where, in spite of elaborate stage moves, he mimed the accompaniment without missing a beat . . . ”
– Opera News

“Appearing as the “trouser” role of Stephano, singer Lauren McNeese did a remarkable job as well. She managed to bring into her song (A Dove in a House of Vultures) a great soaring capacity along with the vive and vigor of a young boy.”
– The Monitor

“Lauren McNeese, Lyric’s Dorabella, was fetching in her liberty bodice, a period siren with marcelled hair. The mezzo has one of those distinctive timbres recognizable six miles away in the dark, with a sparkling quality intriguingly laced with a hint of lemon juice. The text of ‘È amore un ladroncello’ was delivered in teasingly resonant style. The ladies’ vocal blend was silk-smooth throughout.”
– Opera News

“Lyric’s ensemble is one of the best and most unified I have ever seen or heard in ‘Cosi.’ Two of its glittering jewels are star alumnae of the former Lyric Opera Center: soprano Erin Wall as Fiordiligi and mezzo Lauren McNeese as Dorabella. Not only did they really look like sisters, but their voices blended deliciously in the duets.”
– Chicago Tribune

“Among the other characters, Lauren McNeese is charmingly daft as Cherubino, the oversexed page.”
– Post Bulletin

“…On the plus side was Lauren McNeese’s Cherubino. Her warm voice and pixyish performance were utterly enchanting. Much has been made of a countertenor singing the role in the second cast, but it’s hard to imagine him being more endearing as the oversexed teenager. And since even Beaumarchais instructed the role to be played by a young girl, this remains the ideal choice.”
– The Morning After

“…And Lauren McNeese did great things with the pants role of Cherubino the perpetually lovestruck young man who acts as a catalyst for many of the opera’s funniest scenes. McNeese delightfully captured a boy in a perpetual swoon over women, even when disguised as one.”
– Twin Cities.com 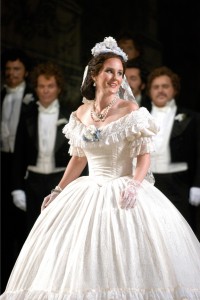 “The Siebel of Lauren McNeese was delightful-exuberantly characterized, with an aptly bright shimmer at the top of the range, like ripples in clear water.”
– Opera News

“Mezzo-soprano Lauren McNeese made the most of a major break that landed her the role of Cherubino. She sounded fresh… and her Cherubino was a charming youth, punch-drunk on love and all but dissolving into a vaporous heap at Susanna’s touch or the sound of the Countess’s voice.”
– Chicago Sun Times

“The creamy-toned McNeese sustained the driving line so essential to Strauss in Sein wir wieder gut from Ariadne auf Naxos. (If Covent Garden still needs a svelte Straussian, it should look no further.)”
– Chicago Sun Times

Lyric Opera of Chicago – Stars of Lyric at Grant Park

“Mezzo-soprano Lauren McNeese’s performance of Meyerbeer’s aria in the Act One, Cavatina: Nobles Seigneurs Salut! from Les Huguenots revealed a voice of great quality which she utilized with excellent phrasing and with an unhackneyed dramatic urgency.”
– Chicago Daily Defender

I recently launched my company, A Healthy Edge, offering lectures, voice lessons and health coaching! Stop by and check out the new website! www.ahealthyedge.com
Photography by Kelly Williams.